The Illinois State Board of Education is asking area residents for input about how it should apply the new federal education law to educating children in Illinois. Teachers, parents and community members are urged to attend a feedback session on Wednesday October 5th from 4:30-6:30 p.m. at the DeKalb County Center for Agriculture at 1350 W. Prairie Drive, Sycamore.

The state board has prepared a draft plan (available here) but there is plenty of room for local input. Some of the questions that will be raised at the meeting include how we should measure student growth, programs necessary so every child progresses and ways to help teachers and school leaders better respond to the diversity and needs of students today.

The final plan will be submitted to the U.S. Department of Education next spring and rolled out in Illinois schools next fall. Educating our children is a community effort and we all benefit when children learn the skills and values to be productive citizens and lead our communities in the future.

State spending continues to outpace revenue as state leaders delay discussions about reforms, reductions and additional revenue. The Commission on Government Forecasting and Accountability (COGFA) released a report last week that estimates a $7.8 billion state spending deficit for the current fiscal year. The Governor’s Office of Management and Budget says COGFA’s number is about $2.4 billion too high since it ignored some special funds spending, federal reimbursements, and Medicaid savings.

Meanwhile Comptroller Leslie Munger reports that bills currently waiting to be paid in her office and at state agencies total $8.47 billion dollars. When pension and healthcare obligations are added to the unpaid bills, the total translates to more than $45,500 per Illinois taxpayer. No wonder so many people are leaving the state.

COGFA issued another report last month concluding that the state’s portion of wagering in Illinois reached $1.229 billion in FY2016 which was a 3.8 percent increase from 2015. The Lottery comprised 56 percent of the total, riverboat gaming 22.5 percent, video gaming 20.5 percent and horse racing 0.5 percent.

There are now more than 24,000 licensed video games in operation in more than 5,600 locations throughout Illinois. Video gaming continues to be a major factor in the decline in riverboat gambling. The state’s revenue from riverboats declined 2.7 percent from 2015 while video gaming proceeds increased about 10 percent. Illinois had the 10th largest lottery in the U.S. in FY2015. Average per person lottery sales amounted to about $222.

Local Innovators Inspired By the Past 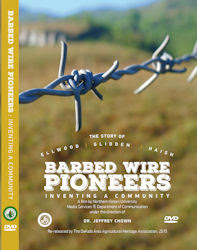 Barbed wire had a significant impact on “taming” the American west, but is only one of many innovations developed in northern Illinois that have shaped agriculture around the world. That innovative spirit continues today and following the screening, DAAHA held a reception to focus on 7 modern day local inventors.

You will hear more about these entrepreneurs in the future but it’s important to point out some of the themes they shared during the reception that may spur others to innovations and growing the Illinois economy. First, like the barbed wire barons, innovators today are good at solving problems. That’s why our schools are now stressing critical thinking and problem solving.

DAAHA is planning future seminars about innovation and ways of drawing attention and encouraging those innovators in our area.

You may soon see an official looking document in the mail. The Secretary of State’s office has the responsibility to print and mail a pamphlet to every household in Illinois with information regarding the constitutional amendments that will be on the ballot.

A federal judge has ruled that the new Illinois law allowing same day voter registration at all urban polling places is unconstitutional. Citizens can still register and vote on November 8, but they can only do so at certain locations.

The law required counties of more than 100,000 people to allow for Election Day registration at every polling place. Counties without electronic polling books and fewer than 100,000 people had to at least provide same-day registration at a centralized location. The judge ruled that while the law was a well-intentioned attempt to get more people involved in elections, it did so “at the expense of lower population counties, thereby decreasing their political representation in Illinois”.

The law was in effect and used during the March primaries when 110,000 people signed up to vote on Election Day. The office of the Attorney General does plan to appeal the ruling.

To avoid making a special trip to register on Election Day, you must register in person or by mail before October 11 or register on-line by October 23. You can register to vote online here. In Illinois you must be 18 before the next election, be a U.S. citizen, and reside at your current address for at least 30 days before the election. For more information on registering to vote, go to the Secretary of State’s website.

Since taking office, Governor Rauner has used his role as administrator to modernize state agency operations and make them more efficient. Of special note is the executive order creating the new Illinois Department of Innovation and Technology (IDIT). Before the creation of IDIT earlier this year, each state department had its own information technology system that was frequently incompatible with other agencies and had outdated software.

Already Illinois is starting to see the benefits. The nonpartisan Center for Digital Government, which rates states on their use of digital technology, upgraded Illinois from C+ in 2014 to B+ in 2016.

There is still time to register for the safe driving course I am co-sponsoring onOctober 12 and 13. Even long-time drivers can benefit from the refresher course before renewing their license and being tested.

The course is taught by Doug Sommer, a Secretary of State certified instructor, and co-sponsored with the DeKalb County Farm Bureau and Country Companies Insurance. This annual defensive driving seminar will be held at the Farm Bureau’s Center for Agriculture in Sycamore from 10 to 3 each day. Participants who attend both days are eligible for a discount on their vehicle insurance.

Time to Bring Suicide Out of the Darkness

Nearly everyone knows someone who has committed suicide, yet we are reluctant to discuss this preventable tragedy. I attended a fundraiser for suicide prevention a few weeks ago and was encouraged by efforts to bring this illness out in the open and raise awareness of the warning signs of someone considering suicide.

This mental illness is the 10th leading cause of death in our country and it touches one in every five families. White males comprise 7 of every 10 suicides. Age is not a determining factor, but risks include job loss, financial stress, marital problems, teen bullying and health issues.

We all can be alert for warning signs of someone considering suicide and be ready to offer support and intervention. These signs include depression, anxiety, irritability, substance abuse, isolation, change in behavior, and even talk of death. The Illinois Chapter of the American Foundation for Suicide Prevention through research and public awareness hopes to reduce suicides by 20 percent in the next 10 years.

I hope to see you at one of our upcoming events, parades or gatherings. Feel welcome to call the office if Jesse, Shelly or I can be of assistance.